The first Cognitive Function and ageing study (MRC CFAS) funded by the Medical Research Council (MRC) and DOH began in the late 1980s with the initial aim of investigating dementia and cognitive decline in a representative sample of more than 18,000 people aged over 65 years. To date there have been in the region of 47,000 interviews with participants in the study. 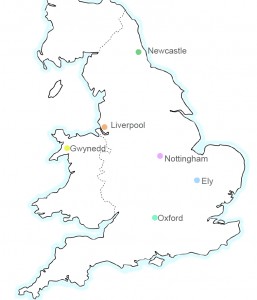 MRC CFAS ran from 1989 – 2011 and had six centres across England and Wales: Cambridgeshire, Gwynedd, Newcastle, Nottingham, Oxford and Liverpool.

The CFAS centres were chosen to represent the national variation with regards to urban-rural, socio-economic levels and in known rates of chronic disease. Five of the centres began recruitment in 1991 and follow an identical study design, while the centre in Liverpool, which was established earlier in 1989, has a different design.

The initial aims of MRC CFAS were:

The range of information collected in the interviews has also allowed the study to also investigate depression and physical disability in the older population in addition to looking at healthy active life expectancy.

Blood or saliva samples were taken from 1,733 participants with assessment interviews during 1997. Other blood samples have also been taken from smaller subgroups of participants at other times during the study and in total there are 2,670  samples stored. A selection of participants in the study also were asked if they wished to donate their brain to the study after death. The number of successful donations is now more than 500.

MRC CFAS has been valuable for the Wanless review, the Department of Health, Department of Treasury, the Department of Works and Pensions and the report for the Alzheimer’s society Dementia UK.   In 2008 3 sites of MRC CFAS were selected for comparison with the daughter study CFAS II.  The baseline data from these 3 sites is called CFAS I.