Below you will find information on the study design of MRC CFAS, to find more about what the study is about please visit the MRC CFAS homepage; a full study background can be found here: Study Background

MRC CFAS has six centres across England and Wales: Cambridgeshire, Gwynedd, Newcastle, Nottingham, Oxford and Liverpool. Five of the centres started in the 1991 follow an identical study design, while the centre in Liverpool, which was established earlier in 1989, has a different design. Random samples of people in their 65th year and above were obtained from Family Health Service Authority lists from each centre. The sample was stratified by age group (65-74 years and 75 years and over) and equal numbers were randomly selected from each age group to produce an overall sample size of approximately 2500 people in each of the areas. The exceptions to this was the Liverpool centre which aimed to achieve a sample size of 6000. 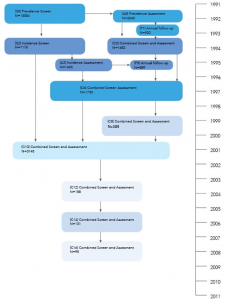 Throughout the study a subgroup of the participants were seen every year and further interviews of other selected participants took place in 1997, 1999 and 2001.

In 2002/3 all survivors in the Cambridgeshire, Gwynedd, Newcastle, Nottingham and Oxford centres were approached by the study and 3,145 were re-interviewed.

After this stage only individuals expressing an intention of donating brain tissue have been followed up at two year intervals.